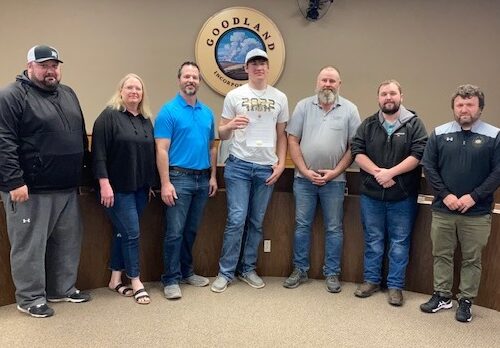 WHEREAS, the City of Goodland celebrates the winning title of Class 4A State Champion wrestler for Dexter Dautel and wishes to honor him for his hard work, dedication and athleticism; and

WHEREAS, Dexter Dautel of Goodland won the 220-pound weight class state championship with a 4-2 decision over Riley Marx from Andale.

WHEREAS, Head Coaches Jonathan Whisnant and Joseph Sramek, team member parents, faculty and student body at Goodland High School were integral in guiding Dexter to victory through their unwavering support: and

WHEREAS, Citizens of Goodland and fans of Goodland High school Athletics are proud of the accomplishments thus far of the Goodland Cowboys Wrestling team and especially Dexter Dautel for his achievement of becoming a State Champion in the 220 pound weight class in wrestling; and

WHEREAS, The City of Goodland commends Dexter Dautel for his dedication, hard work, athleticism, and perseverance in the sport of wrestling, and wishes him well!

NOW, THEREFORE, I, Aaron Thompson, Mayor of Goodland, and the entire City Commission do heartily congratulate Dexter Dautel on his outstanding accomplishment and recognize April 4th as