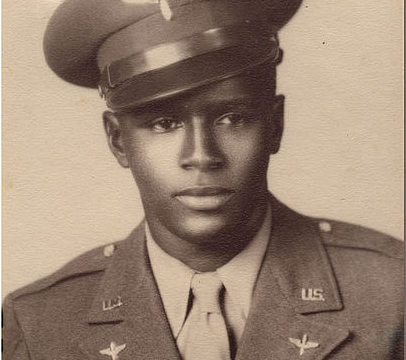 The High Plains Museum is incredibly honored and excited to have Lieutenant Colonel Harvey speak with us via Zoom on September 16th at 7:00 PM Mountain Time.  The presentation will take place at the High Plains Museum, where chairs will be socially distanced and masks are encouraged but not required by visitors.

James H. Harvey III was a member of the 332nd Fighter Group, the world famous “Tuskegee Airmen.” After taking the Cadet Training Exam at Bolling Field, he was accepted for flight training at Moton Field, Alabama. He graduated from Flying School at Tuskegee Army Air Field as a second lieutenant on 16 October 1944. Following graduation, he was assigned to the 99th Fighter Squadron, Godman Field, Kentucky, where he flew the P-47.

On 11 May 1949, sufficient traction had been made politically to officially end segregation in the US military with the signing of Executive Order 9981. This ground breaking ruling came after a constant barrage of complaints, lawsuits and political pressure from African-Americans who were banned from serving in the US Army Air Corps because of their race. This ruling meant that the 99th Fighter Squadron would be disbanded and its members integrated fully into operational squadrons. In a final exhibition of excellence, the men of the 332nd Fighter Group selected three primary members to participate in the first ever USAF Weapons Meet at Nellis Air Force Base. The team from the 332nd placed first, winning the meet flying F-47Ns against other more advanced aircraft. However, the men were not fully recognized for their accomplishment until 1995, when the US Air Force archives were updated officially documenting their victory.

Harvey gained combat experience in the Korean War. He was the military’s first black jet fighter pilot to fly in Korean airspace. On 16 October 1950, he led an element of four F-80s in close support to a bomber mission under adverse weather to attack enemy troops three miles north of Yongsan, Korea. Flying with a low ceiling of 800 feet, Captain Harvey’s flight found the enemy encampment and immediately inflicted heavy damage. For this engagement he was awarded the Distinguished Flying Cross along with multiple Air Medals. In all, Lieutenant Colonel Harvey would net eleven Air Medals in his Air Force career due to his many engagements with adversary forces. After the Korean War, he served as a flight commander, test pilot, assistant group operations officer, flight safety officer, and Battle Staff Training Officer for the Commanding General of NORAD. During his career he flew many aircraft, including the P-51, which he flew during a tour at Williams AFB in Arizona. Lieutenant Colonel Harvey retired on 31 May 1965, after twenty-two years of service. He currently resides in Denver, Colorado.

Currently on display is the traveling exhibit “The Tuskegee Airmen: The Segregated Skies of World War II”.   It is a ten-poster exhibit that explores the history and heroism of the first African American pilots to fly in combat during WWII.  Between 1941 and 1946, what became known as the “Tuskegee experiment” trained more than 1,000 pilots.  Although required to train and fight in segregated units, the Tuskegee Airmen proved to be some of the most skilled aviators during the war.  The undeniable courage and skill of these brave pilots contributed to the desegregation of the United States Armed Forces in 1948.  This exhibit offers a look into the historical challenges and triumphs of these unsung American heroes.  A local exhibit explores Sherman County life, veterans who served their country and the Glider Pilot training center that was located in Goodland in 1942.  We are also featuring prints on loan from James Ross that feature major air battles during the war.  This exhibit will run through the month of September.

As this will be a zoom presentation and questions might be hard to understand, Lieutenant Colonel Harvey would like any questions our audience might have submitted beforehand.  PLEASE SUBMIT QUESTIONS TO THE HIGH PLAINS MUSEUM BY SEPTEMBER 12.  Questions can be submitted in person, by phone, email (museum@goodlandks.gov) or through Facebook.

The Tuskegee Airmen, Inc. is a non-profit, national organization existing primarily to motivate and inspire young Americans to become participants in our nation’s society and its democratic process.  TAI is dedicated to keeping alive the history, achievements, and importance of the original Tuskegee Airmen.

The High Plains Museum is located near downtown Goodland and features exhibits of local history. The Museum is open Monday, & Wednesday through Saturday from 9:00 AM – 5:00 PM MST.  For more information go online or call 785-890-4595.