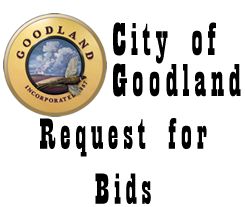 GOODLAND MUNICIPAL AIRPORT
RECONSTRUCT RUNWAY 5-23
AIP Project No. 3-20-0026-23
Sealed bids subject to the conditions and provisions presented herein will be received until 2:00 pm (MDT), Thursday, May 13, 2021 and then publicly opened and read at Office of the City Clerk, for furnishing all labor, materials and equipment and performing all work necessary to: Reconstruct Runway 5-23.

Copies of the bid documents including project drawings and technical specifications are on file and may be inspected in the online plan room at: https://ebhengineering.com/plan-room/

Each proposal must be accompanied by a bid guaranty in the amount of five (5) percent of the total amount of the bid. The bid guaranty may be by certified check or bid bond made payable to City of Goodland .

Bids may be held by the City of Goodland for a period not to exceed 120 calendar days from the date of the bid opening for the purpose of evaluating bids prior to award of contract.

The right is reserved, as the City of Goodland may require, to reject any and all bids and to waive any informality in the bids received.

This project is subject to the requirements of the Davis-Bacon Act, as amended. The Contractor is required to comply with wage and labor provisions and to pay minimum wages in accordance with the schedule of wage rates established by the United States Department of Labor.

This project is subject to the requirements of 49 CFR Part 26 Disadvantaged Business Enterprise Participation. The owner has established a contract goal of 3.6% percent participation for small business concerns owned and controlled by qualified disadvantaged business enterprises (DBE). The bidder shall make and document good faith efforts, as defined in Appendix A of 49 CFR Part 26, to meet the established goal.

Award of contract is also subject to the following Federal provisions: